National Shrine of the North American Martyrs: Blessings Amid Brutality 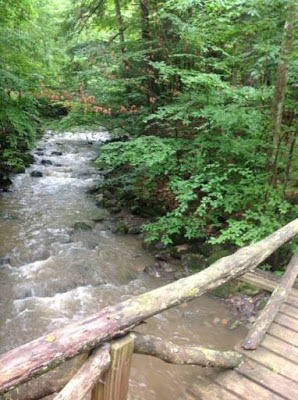 I'm a half-century old and have been a practicing Catholic most of those years. And yet, until yesterday, I had never visited a shrine.  I never really understood the point. As a Christian, I believe that Mystery entered human history and settled among us. As a result, Christ is our constant companion. He is with us in every moment, in the circumstances of every person we encounter. So what's the point, my thinking went, of traveling many miles to a shrine of people who lived out their destinies with an eye on the One who made them?

This was my thinking until I discovered the Jesuit Martyrs of North America, until I read and reflected on their lives, and until our son chose one of them as his Confirmation companion. Then I wanted to go to the places these brave, gentle men had lived and died. I wanted to be better inspired by their example by seeing their lived experiences. This is how Lucas and I found ourselves yesterday morning in rural Auriesville, New York, at the National Shrine of the North American Martyrs.


Driving west along New York State Route 67, I figured we'd see signs for what has been rated the top Catholic pilgrimage site in the nation. But we saw no signs. Surely, there would be signs for the shrine once we arrived in Amsterdam, or along New York 30 South or New York 5S West? Nope. I started to panic. Had we missed the shrine all together? We were miles from everywhere and deep in the lush Mohawk Valley.

We spotted the shrine only at its entrance. 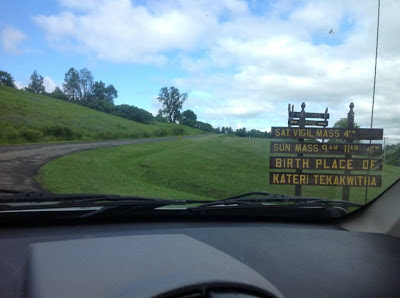 It was still early morning and we realized we were the only living souls visiting the shrine. Here is our van in the parking lot at the Visitors Center. Indeed we never encountered another living soul during our visit. 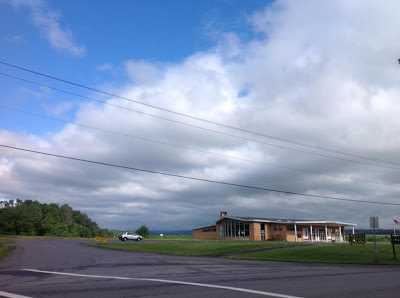 So who were these North American Martyrs (also known as the Canadian Martyrs)? Commissioned by the Society of Jesus, they came from 17th century France's educated elite. They were eight Jesuits who  left their native land to spread the Gospel to the Hurons of Ontario. Through peaceful, methodical means they catechized and converted thousands of Hurons. In the end, all were tortured and brutally murdered, largely by Mohawk Iroquois, who were the Huron's mortal enemies.

Three of the men were martyred in Auriesville; the rest in Canada, where there is a shrine in their memory.  (That shrine's church contains the relics of the Martyrs St. Jean de Brébeuf, St. Gabriel Lalemant, and St. Charles Garnier) 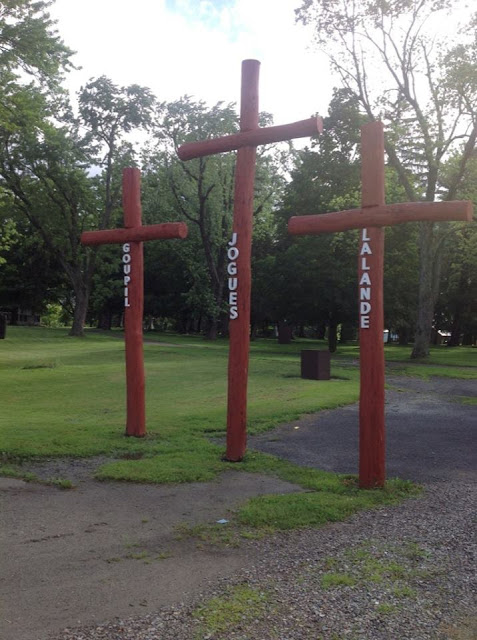 The National Shrine of the North American Martyrs includes five chapels, two museums, a candle shrine, a Jesuit cemetery, outdoor (drive through) Stations of the Cross, a visitor center and gift shop.

For me, the spiritual heart of this place is the ravine, where a grieving Father Isaac Joques,  sought to find and bury the body of one of his companions, René Goupil.  René was brutally tortured and then murdered six weeks after the men were captured by the Iroquois Mohawks and taken to this site, the former village called Ossernenon.

René was the first of the eight martyrs to die and thus the first canonized saint of North America.

St. Isaac Joques's testimony lines the path of the Ravine, giving powerful witness as you walk the wooded path.


"After René had been killed, the Indian children stripped him. They tied a rope around his neck and dragged him to a torrent which flows through the ravine beyond the village. The dogs had already gnawed at his thighs. At this sight I could not hold back my tears. I lifted up the body and, with the Algonquin Indian's help, lowered it into the stream. I weighted it down with large stones to hide it from view. I intended to bury René the next day..."

"The next day, as the Indians were seeking to kill me, my Indian "aunt" sent me to her friend to escape them. This forced me to delay the burial until the next day. It rained all that night, and the stream became a raging torrent. I borrowed a hoe from another long house, the better to conceal my plan. On approaching the spot I could not find the blessed body of René. Alas, my brother's body had been carried away...(Eventually, St. Isaac Joques found his bones as well as Rene's head and buried him in an unmarked grave in the ravine)

What you can't feel from my photos are the incessant biting of mosquitoes ( I reminded Lucas that the martyrs didn't have access to bug spray either). You can't hear the gentle rush of water, but perhaps you can sense the silence that now envelops this place that once held so much human suffering.

That serenity, like the Presence of Mystery,  remains, centuries after this land was a scene of brutality, of torture and injustice and unwavering faith in the One who called us all into being. 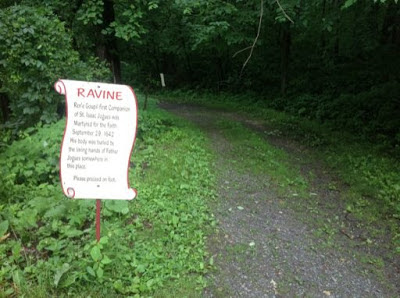 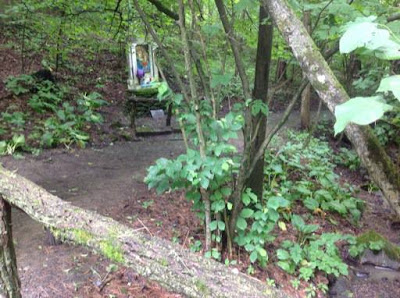 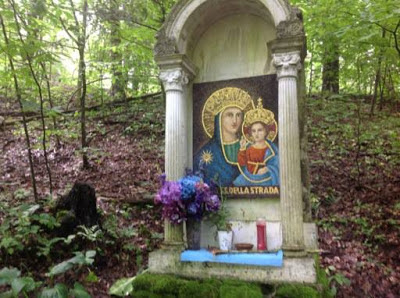 Knowing through experience [...] means reaching the same thing: here therefore the form impresses itself in the soul and kindles desire like a vestige in proportion to its beauty.”

Nicola Cabasilas, Byzantine mystic and Orthodox saint,
as quoted in the  2013 Fraternity Exercises of Communion and Liberation. 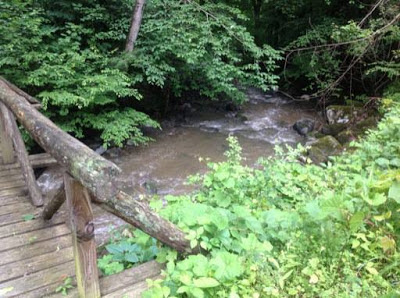