After a Novena: What Are Some Good Ways to Show Gratitude? 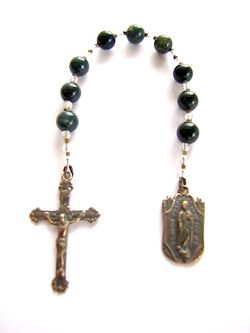 My girlfriend K., like me, was raised Catholic and like me, did not receive a full grounding in the faith.  She asked me yesterday how best to show her gratitude to God for answered prayers. "Prayer works!" she told me yesterday. "It really really works!" I'd like to ask you, dear readers, what your suggestions might be.

See, K. and her husband this spring had their first child, a daughter named Joy. While K. was out on maternity leave from her teaching job, a high school administrator called, telling her that due to low enrollment, her position had been cut to 4/5ths. The loss of income also meant the loss of health insurance for her husband and newborn.So, in addition to the loss of income, her family was going to have to shell out an extra $400 a month to go on her husband's health insurance. They were in a tight spot.

She called me. What should she do?

I told her to talk over the options at a calm moment with her husband and also to pray. She called another friend, who suggested a novena to St. Jude, the patron saint of hopeless causes. K. felt like a hopeless cause. She had no hope, only anxiety. So she began the novena.  In the Catholic tradition, a novena is a nine-day period of prayer - sometimes for thanksgiving, but often when we are asking Christ for something. It is not magic; it is not a gift dispenser for Catholics. Sometimes Christ will answer our prayers in ways we don't want at the time, or don't expect. (Then again, two summers ago I did a nine-day novena, asking St. Joan to pray for me so I could find a job and by the end of the nine days, I had two teaching job offers.)


K.  received another call from a high school administrator. Her job was restored to full time, and with it, the health coverage her family needs.

St. Jude is one of the 12 apostles and, most likely, one of Jesus's cousins. He is invoked when people feel desperate because he wrote letters in the New Testament, urging Jewish converts to the faith to persevere despite persecution.


Now K. faces another dilemma: How to show thanks for answered prayers?  Before her novena was through, she received another call from an administrator, telling her that her job had been restored to fulltime and with it, her family's health insurance.  K. told me she knows the prayers of families and friends also were lifting her family up but she wonders if St. Jude himself needs some kind of thanks.

My advice to her was to try her best to continue to attend Mass each Sunday, even with the difficulties of caring for her newborn (who was baptized a week ago).

I suggested she consider another novena, asking St. Jude to pray for someone else in despair.

She asked me to tell my blog readers how good St. Jude has been to her and asked me to ask you for your suggestions on how to show gratitude. What do you advise?